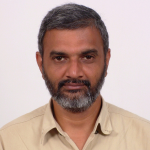 Mr Satya Sivaraman is currently the Communications Coordinator for ReAct’s Empowerment, Engagement and Network Extension (EEE) that links together a variety of ongoing initiatives to develop national policies and community interventions on antibiotic resistance in Asia, Africa and Latin America. He has been with ReAct since its inception in 2006 developing communication material, key messages, networking with civil society groups. He has also helped to conceptualize ReAct Latin America’s Reimagining Resistance project, that advocates an ecological approach to antibiotic resistance. Mr. Sivaraman is a journalist with over three decades of experience in newspapers and TV channels in South and South East Asia. He has also worked with the United Nations Economic and Social Commission for Asia Pacific and other UN agencies in different capacities. At ICQoL2017 he will be sharing some of the work related to QoL that he had undertaken with ReAct.

Dancing with the Bacteria

The revolution going on in microbiology, particularly microbiome studies, has mind-boggling implications for human beings about how to live and understand life. It raises fundamental questions about humanity (e.g. who are we?) and our relation to both macroscopic life (the universe and all visible entities) and to the microscopic (the internal and external biosphere). Microbes are the invisible connectors of all life forms. In turn, in the larger universe, human beings are like microbes. By building a new conscious relationship with the microbes in and around us, we could through them uncover a new way of living with each other and with all beings in the ecosystem.

But what is involved in practice in adapting ourselves individually and collectively to uncover our microbial nature, its immense fertility and to nurture microbes ?  Fear of microbes is very deep-seated in human experience, perhaps now operating as a generalized anxiety. The scapegoat dynamic is alive and well in our relationship with microbes, and never far from the surface in all levels of human relationship.  It is palpable in the current instability and the politics of fear being played out around the world. Microbes, in particular bacteria and viruses, are symbols, metaphors and real age-old scapegoats of disease beyond their legitimate role. In this climate, the phenomenon of antimicrobial resistance has fueled fear of superbugs and the microbial world in general. Antimicrobial medicines, whilst saving many lives, have masked the need to pay attention to the ecosystems in which we live, in cities and villages, homes and hospitals, animal husbandry settings, rivers, soil and air.

For directions, or for further help reaching the conference, please see our venue page or contact us at intconf@as4qol.org.